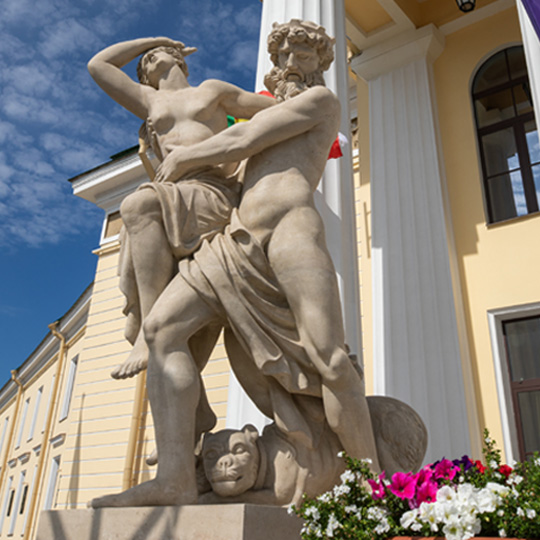 The Mining Museum, founded in 1773, is one of the world's finest museums for geology, mining and metallurgy. The museum is housed within Saint Petersburg Mining University, the first higher technical university in Russia.

There are over 230,000 items in the museum's collection, with the rarest minerals, gemstones, metals, meteorite samples, historical and working models and prototypes of mining machinery and equipment, palaeontological specimens, and historical records about the university among them.

The museum is located in the historical centre of St. Petersburg in a building designed by Andrey Voronikhin in 1811 in the «Russian Empire style».

In 1821-24, during the extensive reconstruction of the Mining Institute supervised by the architect Alexander Postnikov, the interiors of the majority of the museum's halls were redecorated with Empire ornament.

The Column Hall owes its splendour especially to a plafond by Giovanni Battista Scotti, the greatest muralist of the early 19th century. The plafond features an allegorical panel of three elements. Catherine II, who established the Mining School, instils obedience in old boys to the ruler and encourages them to work and acquire the knowledge of sciences taught at the institution. In the centre, Peter the Great, founder of the mining industry in Russia, observes the progress and development of the latter with satisfaction. The last one shows the prosperity of mining under Emperor Alexander I — Russia, in the form of virtue, approaches the temple built to glorify the sons of the fatherland. Therein those express their gratitude for the favours and privileges granted by the Emperor to the Mining Cadet Corps. 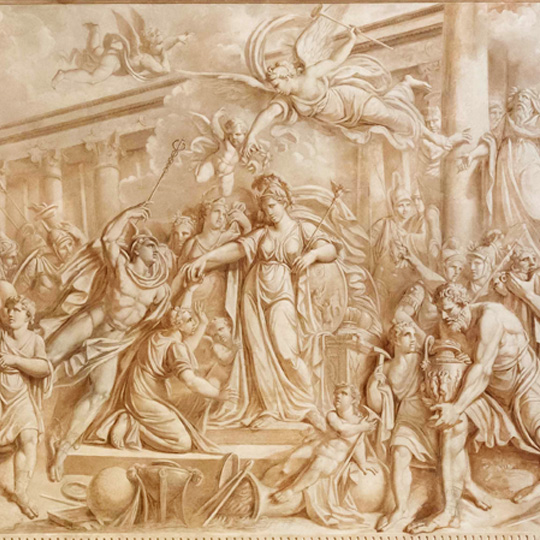 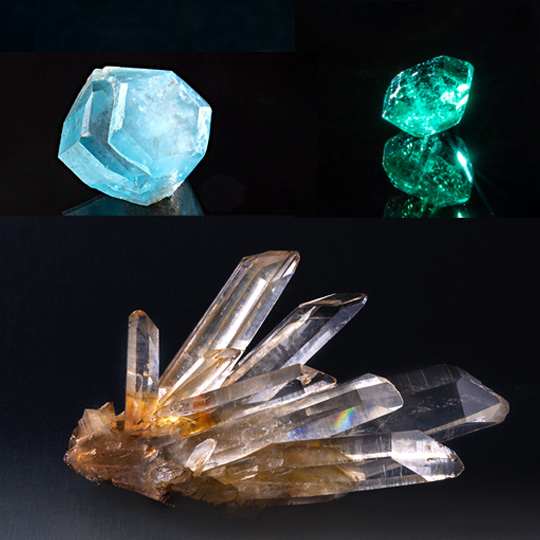 The renovated museum space was equipped with the new furniture – showcases and cabinets – performed in one style to match the architectural design of the halls. Several display cabinets, created by the court furniture-maker Christian Meÿer, belonged to Catherine II herself and served to store and exhibit the Empress' private mineral collection. In 1816, along with the collectables, they were transferred to the museum of the Mining Cadet Corps.

In 1821, the abundance of the museum's unique collection was described by Pavel Svinyin in Otechestvennye Zapiski. He wrote: "<...> the entire cabinet was still housed in the Column Hall that had been by then redecorated. On top of all the cases were placed the busts of philosophers and famous scientists of antiquity. The display cases themselves were inscribed in golden letters with the names of the minerals put inside. The rarest, unusually shaped, and large-size specimens were positioned on the windows under tailor-made glass covers. The objects of enormous size were installed onto special pedestals between the columns. The physical instruments were shown off in the centre of the hall. In the 1820s, the mineral cabinet of the Mining Cadet Corps had on display: a massive chunk of Ural malachite, a copper nugget weighing over 100 kg – the largest in Russia at that time, large druses of native sulphur, a gigantic quartz crystal of 500 kilograms in weight, native silver and gold, samples of fluorite, pyrite, etc.".

The evidence of contemporaries suggests that the museum of the Mining Cadet Corps was one of the largest in St. Petersburg in the first quarter of the 19th century. Since 1825, following the order of Emperor Nicholas I, therein were reposited all nuggets of precious metals from the Saint Petersburg Mint. They were put on display in special cast-iron safe boxes. A sizeable section was allocated to the models of mining equipment used in the early 19th century. The expositions of the Russian topographical collection (now the Malachite Hall) were completed in 1828 with the transfer of the largest-sized exhibits from the old mineral cabinet (the Column Hall).

From the 1830s to 1866, most of the attention was paid to enriching palaeontological and geological collections. By contrast, the focus was previously on the mineralogical and model collections. The situation started gradually changing as Konstantin Chevkin was appointed Chief of Staff of the Institute of the Corps of Mining Engineers in 1834. 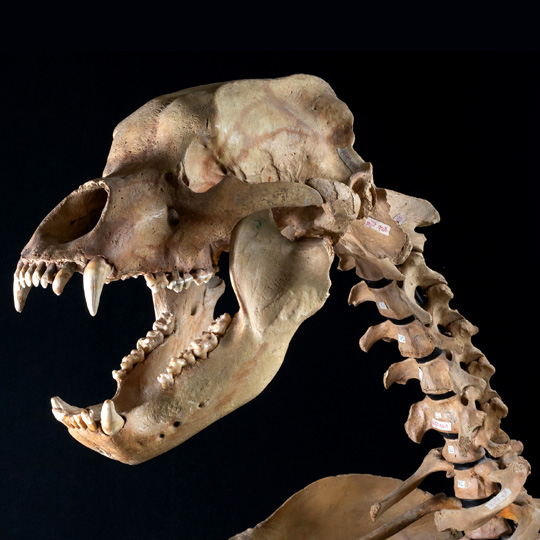 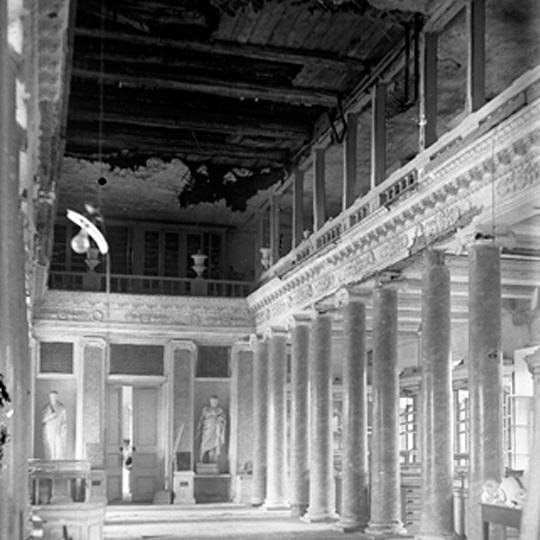 During the early Soviet period, the museum's funds were primarily replenished with the nationalised property of abandoned mansions, palaces, and corporate facilities. The new additions included:

New thematic areas were set up in the museum. These are cosmogony, petrography, and natural resources. Decorative objects, cut stones, and raw minerals of gem quality were merged into a new section – Applied Mineralogy. The mineralogical collection was enlarged with samples of synthetic minerals.

During the Great Patriotic War, the museum was forced to evacuate the most valuable items from the mineralogy section – diamonds, nuggets of gold and platinum, and other valuables – and move them to Sverdlovsk for temporary storage. Some collectables were packed and lowered into the Mining Institute's underground vaults. However, most of the exhibits were left where they were, confined in the museum's halls. The collection was not particularly damaged. The Column Hall was hit the hardest, with a torn roof, ceiling, and trusses resulting from the shell explosion.

By 1948, in commemoration of the 175th anniversary of the Mining Institute, the museum's expositions had been almost re-created. Scientific and academic activities had recuperated. By the Decree of the President of the Russian Federation of July 30, 1996, St. Petersburg Mining University, alongside the Mining Museum, entered the State Code of Particularly Valuable Objects of Cultural Heritage of the Peoples of the Russian Federation. The museum's collections are part of the Museum Fund of Russia. 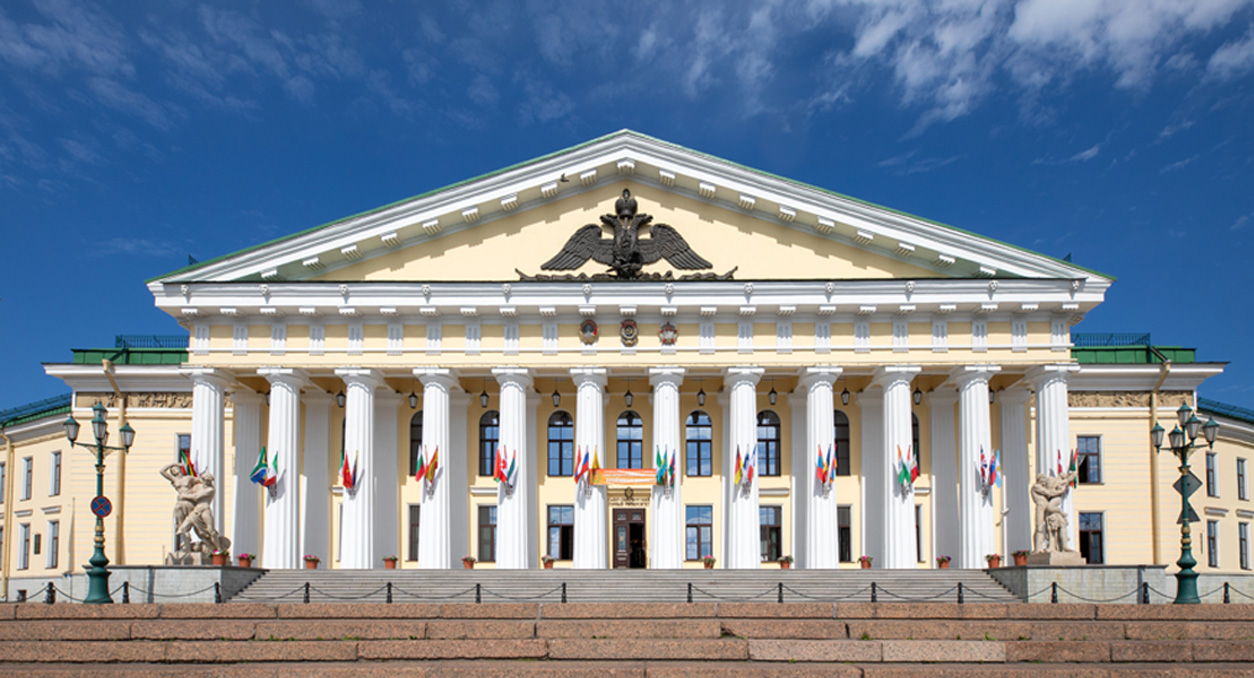